A great feel good story about what martial arts can do for a person and a community. 🙂 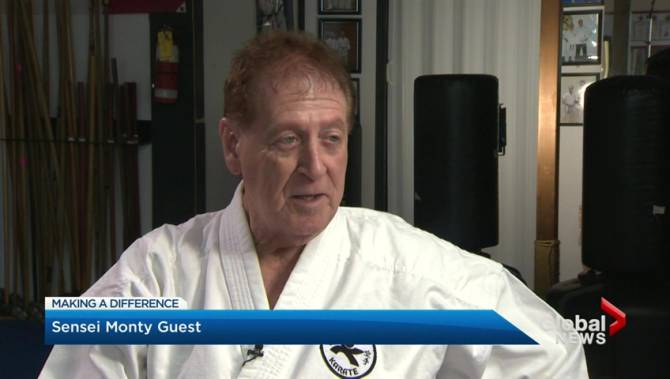 WATCH ABOVE: Sensei Monty Guest is a humble man who has devoted more than 50 years of his life to guide others on the right path. Susan Hay has more.

Seventy-six-year-old Monty Guest is a humble man who has devoted more than 50 years of his life to guide others on the right path. Sensei Guest is a ninth-degree black belt in a Japanese-style form of martial arts.

“It’s called Chito-Ryu and Chito-Ryu was the first karate that was ever taught in Canada,” Guest said. “I was lucky enough to be one of the first students.”

Guest said his goal as a teacher is to develop the mind, body and spirit of all his students with an open mind and a happy heart.

“I’ve learned confidence because I used to be very shy, but now since I have taken karate I feel more open,” said Maya Wawryka, a nine-year-old karate student.

“It takes a lot of discipline to get up in the morning, go through an entire day out in that world, and still be the same person that you were when you woke up,” Guest said.

“I have learned respect, self-defense, confidence, and how to be a better person in general,” said second-degree black belt, karate student Jessica Fik .

Guest founded Kai-Shin Karate Association in October 1967 with a focus on humility, kindness, confidence, self-discipline and respect for all others – the same values he lives by five decades later.

“The ultimate goal of karate is not to be a tough guy, but the ultimate aim of karate is the perfection of the character, that’s always been in martial arts,” Guest said.