Can’t wait to see this one to see what they do with it!! – http://www.iol.co.za/entertainment/karate-kid-comedy-series-reboot-in-the-works-10704400 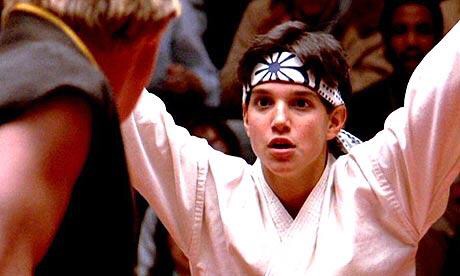 Let’s just get this out of the way first: The first Karate Kid movie is, undeniably, a sports movie.

There’s a karate tournament at the end, complete with a huge March Madness-style bracket.

The fact that the first two-thirds of the film consist of teenage angst and probably dubious martial-arts instruction is besides the point. Daniel LaRusso wins a big shiny trophy at the end. Sports movie.

As for the other films in the franchise: I’m not sure what The Karate Kid Part II is, but it’s not a sports movie, even though it begins literally where the first one ends.

Anyway, this far-too-long introduction is merely throat-clearing for the news that two of the main characters from the original Karate Kid, the one from 1984 that enchanted just about everyone under the age of 12 and is officially a sports movie, are coming back for a 10-episode comedy series on YouTube Red, the streaming video service’s subscription offering.

Titled Cobra Kai, it will focus on a down-and-out Johnny Lawrence, the bully played by Billy Zabka in the original. According to the Hollywood Reporter, Johnny will reopen the infamous dojo and reignite his karate rivalry “with a now-successful Daniel, who has been struggling to maintain balance in his life without the guidance of his mentor, Mr Miyagi”. Both Zabka and Ralph Macchio, who played the titular character, will return to the roles that made them famous, while also serving as executive producers (the Reporter said they “pitched the series all over town,” drawing offers from Netflix, Amazon, Hulu and AMC because reboots are all the rage). Pat Morita, who played Mr Miyagi, died in 2005.

“Like everyone who grew up in the 1980s, the three of us are enormous fans of The Karate Kid, scripwriters/co-executive producers Josh Heald, Jon Hurwitz and Hayden Schlossberg said. “Cobra Kai will be a true continuation of the original films, packed with comedy, heart and thrilling fight scenes. We can’t wait to reignite the LaRusso-Lawrence rivalry, and we’re thankful to our partners at YouTube Red, Sony Pictures Television and Overbrook for their shared enthusiasm in making our dream project a reality.”
Heald is best known as the scriptwriter for 2010’s Hot Tub Time Machine, while Hurwitz and Schlossberg were responsible for the Harold and Kumar films plus a latter American Pie movie, so Cobra Kai is definitely going to skew funny, which frankly is the only way to tackle the story of two cartoonishly drawn characters from 30-plus years ago. No word yet on if Martin Kove will reprise his role as evil sensei John Kreese, but he should.