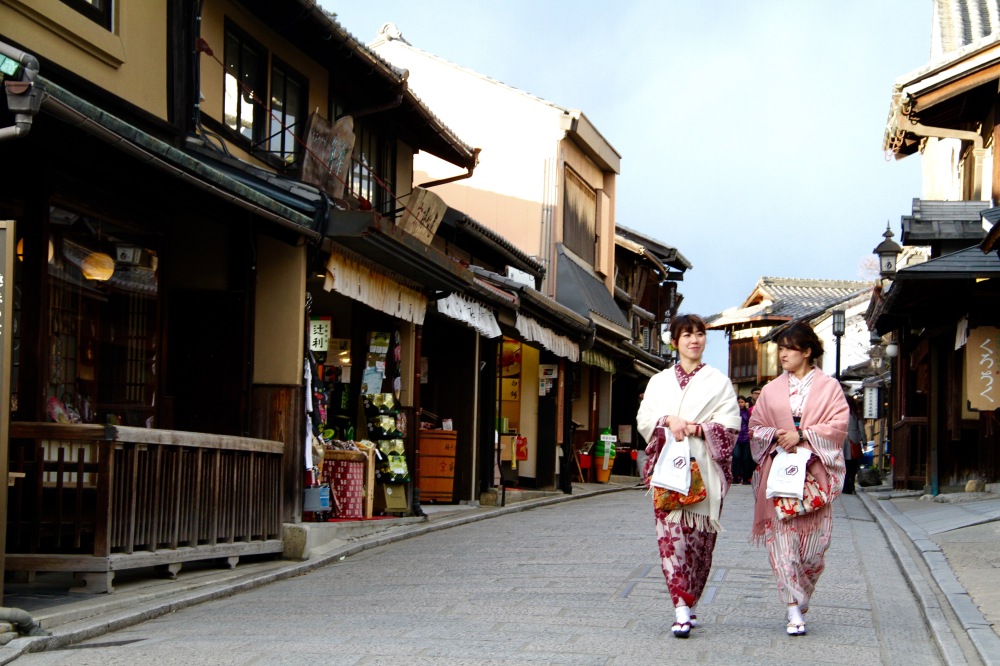 I might be slightly biased, but wow I love this city…

This hillside walk lets you taste, touch, and see the historical Kyoto of stone-paved streets, traditional architecture, and tiled roofs you traveled so far to find. Three narrow streets by famous Kiyomizu Temple intersect to create one leisurely and easy-to-navigate stroll.

Photo by Gail Nakada.
Kyoto has banned overhead telephone poles and electric wires from this part of the city to preserve its traditional beauty.

The streets are lined with arts and crafts stores, Japanese-style cafes, tea houses, and vendors of food fast or gloriously slow. And with no overhead power lines to get in the way, they are picture perfect!

Photo by Gail Nakada
Start your walk after visiting historic Kiyomizu Temple. The main temple you see here is actually about a five minute walk from the entrance gate.

Start out at Kiyomizu Zaka, the hill leading to and from twelve-hundred-year-old Kiyomizu Dera Buddhist temple in the Higashiyama (eastern mountain) district. Don’t be put off by the word ‘mountain,’ the temple is actually only a few minutes from Kyoto Station by bus or taxi.

Stop at the shops on the way up to the temple so that after visiting Kiyomizu, you can head for the next part of the walk without too much backtracking.

A word of warning about timing. Though the Kiyomizu pagoda and main gate are beautifully lit every evening, the temple closes at dusk except for a couple of weeks in the latter part of November and late March to mid-April. Since the temple closes, the shops do too. Don’t save Kiyomizu Zaka for a late evening stroll as generally the stores will be shuttered and you won’t be allowed to enter the main temple.

Photo by Gail Nakada.
Souvenirs for every budget and taste — including those who love kitschy cats — fill shops on these hillside walks.

Kiyomizu Temple is one of Kyoto’s top sights, making this the most tourist-intensive of the three streets. That doesn’t make it any less fun. Both sides of the crowded hillside are full of experiential surprises that let you feel (and eat) like a Japanese! You won’t be disappointed wherever you go. However, I’d like to make one suggestion few foreign visitors know about.

Photo by Gail Nakada.
Lucky sweets from Fu Mon An cake shop are a favorite with locals. Each little cake comes with one of their one-hundred lucky cards.

Approximately halfway to the temple is a narrow covered walkway on the right (on your left if you’re coming down). From the ceiling hangs a large red lantern with a stylized woman’s face on it. This is the entrance to Fu Mon An cake shop.

The shop is famous for its Hyaku Fuku Manju (one hundred good luck blessing cakes), tiny Japanese sweet pancakes stuffed with a variety of fillings. Each cake comes packaged with one of their ‘one-hundred luck charms’ to keep after the treat is gone. Japanese are in love with luck and Fu Mon An is a favorite among Kyoto residents and Japanese visitors. Open daily, 10-5:30. http://fumon-an.co.jp/index.html

Before you go, copy the locals and stop at the stone ‘Happiness Portal’ in the garden. Bow, put your hands together and make a wish. Then, keeping your wish in mind, go through the portal (watch your head) and around the front. Bow again.

Photo by Gail Nakada
The stairs from Kiyomizu Zaka to San Nen Zaka.

San Nen Zaka, the next part of this walk, connects directly to Kiyomizu hill, making it an easy transition after you finish your explorations in and around the temple. Coming down from Kiyomizu with the temple entrance and Pagoda at your back, you’ll see a wide cement staircase on the right. Take it.

Both the top and bottom of the staircase make excellent photo spots. One of the stores next to the stairs displays traditional parasols during the day and visitors— often in kimono — make it a point to stroll through this area and pose for pictures.

Photo by Gail Nakada.
This walk is a must-see stop on a Kyoto photo itinerary for visitors taking advantage of kimono rental and dressing services. Locals love this trend since city streets are full of people in kimono again.

This street is particularly beautiful at twilight when soft light just begins to shine from lanterns and through rice paper panels onto the street.

The hill slopes gently for several hundred yards. You won’t even notice San Nen Zakatransitioning to Nin Nen Zaka. It’s still the same street and if you stay on it, you’ll eventually end up at Kodaiju Buddhist Temple. Turn left at the street directly before the entrance to the temple and it will bring you to Ne Ne no Michi, (it’s pronounced neigh neigh), another charming walk that will take you close to Yasaka Jinja Shinto shrine.

Photo by Gail Nakada.
This shop on San Nen Zaka sells traditional (and affordable) hair pins. You don’t need an elaborate Geisha-style up-do. Japanese use them now to enhance a simple ponytail.

If you turn at the larger street before the entrance to the temple grounds, you’ll soon be back at the busy boulevard city buses take to and from Kiyomizu temple, Yasaka Shrine, the Gion entertainment district, and Kyoto Station.

But don’t go just yet.

Photo by Gail Nakada.
Yasaka Pagoda from Yasaka Dori street. One of Tokyo’s iconic shots and so easy for anyone to take.

Yasaka Dori is a lovely, quiet path through the back streets leading to Yasaka Pagoda – no relation to Yasaka Jinja shrine. It branches off to the left as you come down San Nen Zaka hill.

A little way along San Nen Zaka street is a fork in the road and a signpost in English that says Ni Nen Zaka going one way, and an arrow pointing to the left for Yasaka Pagoda. Take the left fork, you’ll be glad you did.

The walk presents lovely views of the Yasaka-no-To tiered pagoda above traditional gabled roofs. Rickshaw drivers often take this path back after dropping off their charges. It’s old Kyoto. It’s beautiful. You will be so happy you came.

Photo by Gail Nakada.
Rickshaw drivers often take Yasaka Dori as they return from dropping off customers at the bottom of the hill.

Be sure to stop at curious little Yasaka Koshin Do Buddhist temple on the way to the pagoda. Don’t be fooled by its small size. Koshin Do has a rich religious heritage. Step through the gate to see the altars covered in hanging strands of small, colorful pillow-like figures. The dolls represent Kukurizaru, a monkey with bound hands and feet.

Photo by Gail Nakada
Wish monkeys at Koshin Do Buddhist temple. Monkeys are the spirit animal for the deity enshrined here.

The legend says you may ask for one wish to be granted, but in return, you must place one of your desires, spiritually speaking, within the monkey, write it down, and hang it up. It’s sort of like Lent, but with stuffed animals.

Monkeys are the spirit animal for the Koshin Doctrine.They even incorporate the ‘hear no evil, see no evil, speak no evil’ trio in their devotional objects. You’ll see them at the temple.

When you’re ready, retrace your steps back to San Nen Zaka and finish your walk. If you walk on to Ne Ne Zaka, you’ll be very close to Yasaka Jinja Shrine and the entrance to the Gion shopping street. Gion is an excellent place to find something to eat so you can have the energy to explore more of this legendary city!

Photo by Gail Nakada.
Find food served fast or gloriously slow at shops, cafes, and restaurants along this walk. This shop serves traditional Japanese desserts — and beer! Something for everyone.

Access: From Kyoto Station, take the 100 express bus or the 206 bus to Kiyomizu Temple. It’s about a ten-minute ride. By taxi tell them “Kiyomizu Dera” or get your hotel to write it for you. City buses let visitors off near (but not at) the bottom of Kiyomizu hill. Tour buses and cars park midway up. Follow the crowd. It’s a bit of a huff and puff to the top.

Mobility impaired: If you or someone in your party has mobility issues, I suggest taking a taxi from Kyoto Station. Taxis are cheaper here than Tokyo. Kiyomizu Temple’s English Website has a map for wheelchair access around the grounds: http://www.kiyomizudera.or.jp/en/visit/

I have yet to find alternative access to the steps leading from Kiyomizu Zaka to San Nen Zaka. If you are in a wheelchair or just can’t manage stairs, I suggest splitting the walk in two. Work backward from Kodaiju Temple and Ne Ne Zaka until you come to the foot of the San Nen Zaka staircase. This in itself is a lovely walk and you won’t be disappointed. Then, take a taxi to Kiyomizu Temple and explore the area there.

Though there are no stairs, part of the downward path from San Nen Zaka to Yasaka Pagoda is a little steep for wheelchairs. Use caution. You could take a taxi to Yasaka no To Pagoda and walk up the road – even just part way — for this iconic view. Be sure to tell the taxi driver Yasaka no To or they will take you to Yasaka Jinja!